I have to tell you, I never liked raspberry nail polish. Or lipstick, for that matter. It just felt so old fashioned to me, so boring, you know, like something from way back when women used to wear bright matt nail and lip shades only. Now. don’t take me wrong, I do like and have always liked classic nail polish shades, say, red or pink or cherry, but somehow I was not a fan of raspberry. Also, I actually oftentimes wear pretty funky nail shades like green and blue, because I get bored of all the reds and pinks and whites and nudes and have to mix and shake it up with something artsy. As for raspberry, it was so not my kind of thing.

But then something came up that changed my attitude completely.

It’s such a bright clean raspberry shade. It’s a little bit of a modern take on raspberry, actually. When I saw it on my nails, it was just so beautiful, so womanly, so elegant, so everything I want from a nail polish. Here, take a look.

Having had such great experience with 775 Star by Dior, I didn’t hesitate to pick up another raspberry shade, this time around it was a limited edition 635 Expression by Chanel.

It’s a more classic raspberry than that by Dior. And still I love it. It’s classy and sophisticated. Chic. Red carpet.

Both 775 Star by Dior and 635 Expression by Chanel are a great quality and easy to apply and wear. 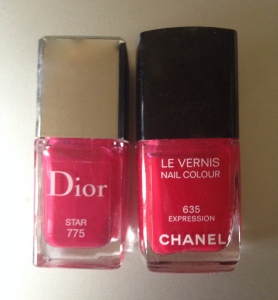 And I have such a warm feeling for both these shades, because they helped me come to love raspberry nail polish. I enjoy wearing it. And will be sure to do so every now and again.

P.S. By the way, it feels like fuchsia is the new raspberry. I do like fuchsia, but there’s so much of it I’m getting a little bored. So, welcome to my world, raspberry 🙂