So, French paradise, huh, Lancome? Ok, let’s see. The two things I picked up from this collection is an eye shadow palette and a nail polish. Why? Because those rose and coral shades for lips and cheeks that are part of this collection too just make me go too sleep 🙂 They are so generic. There’s also cream eye shadow stick, but I’ll do a separate post about it. 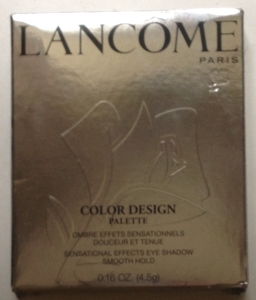 Anyway, there are traditionally six shades. The eye shadow is of good quality, not too soft, not too solid. You can layer it thinly or more intensely. Also, there’s very little eye shadow in here. This palette by Lancome always looks so much bigger in the promos than it is in real life. Keep it in mind. Now the most interesting part. The shades 🙂

Top row. Left to right. The first three shades in the swatch on the left here.

Light coral. Nude like almost. Looks to me like a base shade for the rest of the colour in the palette. No sparkle or shine to it, just matt.

Coral. It’s on the lighter side too. And it’s also matt. A little darker than the first one, still nude like due to how soft a shade it is. Nothing surprising or exciting, I would say.

Bottom row left to right. The fourth, fifth and sixth shades in the swatch on the left.

Grey. Kind of pearly silvery grey. Hm… Can someone tell me what’s the connection to the other three shades in the palette here? No? Well, I can’t tell either 🙂 Anyway, this silvery shade is nice, it’s not too dark, not to light, somewhere in the middle. I like it.

The prettiest possible blue. Not aqua blue. For once J Elegant blue. Kind of pearly blue. Grown up blue. Divine. Love this shade. Finally, there’s blue classic with a modern twist as opposed to all the aqua that’s ever so common.

Blue. Pretty dark. On the way to navy blue. No shine, pearl or sparkle. Eye liner like shade. Completely unexpected, because one can’t really tell by the look of it, in the swatch some kind of blue green undertone showed up. Not too much, but still. I would never for the life of me think it’s there 🙂

What can I say about the palette? Well, first of all, is there any connection between the top and the bottom row, if any? Or is it designed to be two completely different colour schemes? If that’s the case, I don’t know why. It would make more sense for the two colours in the palette to match, as opposed to going all brown and coral and then all blue all of a sudden. The result of this is that, as beautiful this palette is, it’s very hard to tell, who it is for. Blue eyed beauties? The whole coral part won’t look that good on them. Brown eyed beauties? What are they supposed to do about the blue? For the green eyed and the grey eyed it’s a miss altogether. So, the palette as a whole to me is not a great shade combination. The only great thing about this palette is that one blue shade. Not only it will bring out all the blue in blue eyes, it will go well with hazel eyes too. So nice. Still the palette itself is a – why are you doing this? – kind of thing for me 🙂 Why these shades? Why together? I have no answer.

Moving on to the nail polish.

It’s a great blue. Just like that eye shadow and exactly for the same reason 🙂

It’s not aqua, it’s an elegant sophisticated blue. A great match for any complexion. Qualitywise it’s Lancome like good.

This blue is linen like blue. It’s dark enough not to be crazy blue and stand out big time. And light enough not to go anywhere near navy blue. Good job, Lancome 🙂

I love this shade. With all the blue that gets released in nail polish it’s so nice to see something special. Even if you’ve never worn blue on your nails before and weren’t planning to, you might want to try this. And you might like it. In fact, this blue is so sophisticated it can even be worn to the office. And can be the kind of shade on vacation that will go well with a lot of different clothes – grey, white, black, beige, blue, obviously – so that you don’t have to change your nail colour often. 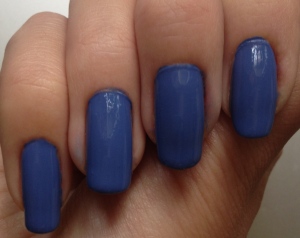 I’m telling you, this blue is really something 🙂

French paradise? I’m not sure about that. Although that one blue eye shadow shade and definitely nail polish are quite French and chic. So, maybe 🙂