You know how I feel about professional make up. Generally speaking, it’s just not fit for everyday use. It’s meant for shoots and runways. But…

It depends. Really depends. I mean, these Neoneutrals here are interesting. And when I’m interested, I’m always ready to try. Again and again 🙂

I like the name of the collection. It’s a nice pun on ‘neon’ shades and ‘neutral’ shades in modern make up. British designer Christopher Kane says the concept is that it’s fresh and funky to use neons in place of nudes. Hm…

Let’s see what he means. Nudes as it is and neons as it is might be a boring thing. But these neon nudes or nude neons or neons&nudes aren’t as simple as they look or sound.

When you come to think of it, there is some truth in the fact that a lot of shades that were considered to be neon, are so much in everyday use now, that they almost feel like neutral. Think coral and fuchsia, for example. They are very bright shades, but they are so common now they are almost used like nudes.

Anyway, there’s more to the concept of the collection than just that. But to understand it better, we should see the products first.

There’s fuchsia lettering on the product package itself – I’m down with this design. It’s really edgy and modern and sophisticated. And creative, which I love.

Velvety packaging. It is velvety for a reason. So that it doesn’t slide out of make up artists’ hands, when they do makeup in a rush, say, backstage. Well, I’m not a make up artist, but do I drop stuff when applying make up? Yes, I do. So, I’m down with that.

These shades are not really neon. They are pastel almost, a wash of glow and pale shade on your lids. 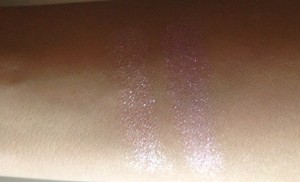 I think, these shades are great. I love them. The texture is quite good. These shades are so universal. They will easily cover the whole colour range, so wherever you go and whatever you wear, this is like a magic wand to make you eye make up work. Well, and if you brush on heavily, this is undoubtedly a great going out kind of look thing.

So, blondes, brunettes, redheads, blue eyed, hazel eyed, green eyed beauties, just everyone out there will benefit from having this duo at hand. This is a great job and a great eyeshadow duo.

Then there’s a single eyeshadow.

Ugh. I don’t like orange or coral on my eyelids, generally speaking. But… remember what I told you? These neoneutrals aren’t that simple. It’s a Wonderland, where everything is not exactly what it looks to be at first glance. So, this bright and vibrant orange proves to be just a wash of sparkle, not even a pearl base, really. 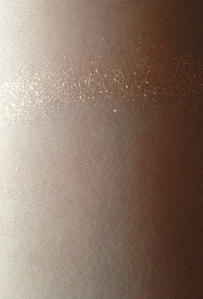 And its warm coral and golden sparkle succeeds in winning me over. Me! Me, who doesn’t like coral period. And doesn’t like it specifically in eyeshadow form.

This Wonderland by Nars and Christopher Kane got me though. It works. It’s good. 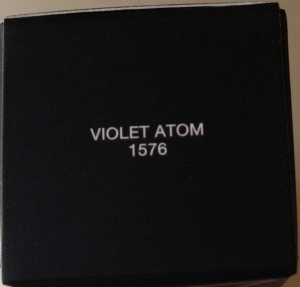 This multi use illuminating thing is a typically professional make up artist product, where one shade sometimes is used for highlights in different face areas, and where, for the sake of moving really fast, one product tends to be used for different purposes.

Well, this shade is neon and it’s a tough one to pull.

It might be good on the catwalk, but blondes or anyone fair skinned should stay away from it, it will bring out the bluish undertone in white skin, that you might not have even known to exist before. Everyone else should be careful too.

Lips and cheeks painted with this kind of violet can look not too nice, even if you use just a little bit of it. 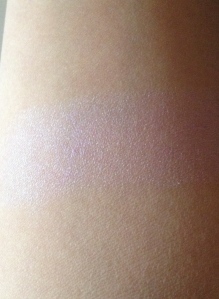 For me this kind of shade is definitely a pass. It’s artsy, but not too much use in the real world, although I’m sure in Wonderland they find it exciting 🙂

This looks neon all right.  A bright hot vibrant pink. 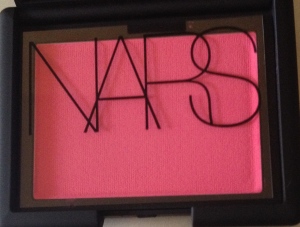 But once again, it’s not as simple. 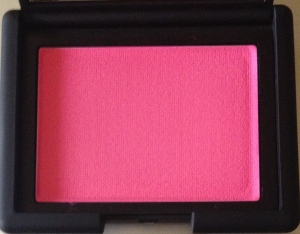 When swatched, this shade proves more tender than it seems in the box. Still bright though. It’s like a bright pink rose.

The way to use such shades is to get them underneath powder or base for them to kind of shine through illuminating your cheekbones.

This shade is very pretty, don’t be afraid of it, you can always use just a little bit. To show you that it’s not as crazy bright and neon as it seems, I compared it here to a limited edition blush by Dolce&Gabbana 45 Raspberry from this year spring collection.

See how Starscape (on the left in the swatch) is not really a full on neon, while Raspberry (on the right) is a truly bright blush?

As everything in this collection, this is not an accident that this shade is paired up with that other bright pink.

This shade is so nude you almost can’t see it in the swatch or on the cheeks.

But it can be mixed and matched with Starscape to mute it and sculpt and highlight and create your own unique shade.

To round up the look there are four shades of lip gloss.

As with everything else in this collection, you need to take a very close look at them to get what they are all about. 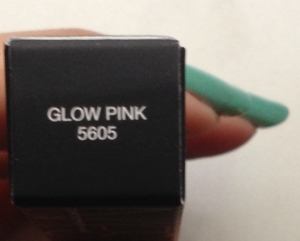 Looks like a super bright pink with a strong violet note.

Looks like a fair beige nude shade with some pink in it. 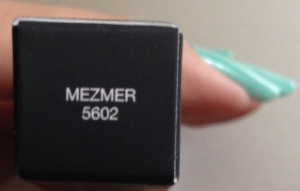 When swatched though, all four neon shades prove to be more neutral.

Proves to be tender pink with a a touch of violet.

Proves to be an ever so delicate pearly pink with a beige echo lingering in the distance.

Proves to be a light to medium coral, depending on how much you layer it.

Proves to be a full pink too shy to be bright.

These four shades of lip gloss is a perfect way to show how neons can turn neutral and neutrals can turn neon.

And they bring us back to the bigger picture of the whole collection.

And this bigger pictrure makes me think…

Modern day world is a mix. Life and time is changing, vogue is changing and transforming things around us. Trendy shades of today go out of fashion tomorrow, then come back in full swing, get forgotten and then pulled back in the light triumphantly. What one considers neon and would never wear, can be neutral or nude for others. And vice versa. It’s a game and in it there’s a multitude of parallel universes that are human beings, so similar and so different, so alone and so together, so bright and so muted, so exciting and so everythng.