This mini collection by YSL consists of pretty much three products that are all going to be additions to their permanent range.

There’s Rouge Pur Couture Vernis a Levres Glossy Stain Plump Up, which is basically a lip primer with plumping effect. I’m not that keen on all these lip plumping products, so I don’t have it yet, but, maybe, I’ll get it, we’ll see.

The other two products from this range though got me interested.

The first one is Full Metal Eyeshadow. It’s a liquid eyeshadow promising metal effect on our lids.

Well, I love liquid eyeshadow AND I love metal eyeshadow look, so I want to love this new product.   But…

As much as I like this shiny wet look in eyeshadow, and as much as it seems, liquid eyeshadow should be my natural choice, it’s not, because this texture is so hard to pull and operate. Cream eyeshadow is so much easier to apply, generally speaking. And depending on a shade, it can give you this shiny look too, you know. So, I prefer it to liquid eyeshadow texture.

The only liquid eyeshadow, that’s been released quite recently, actually, that I like, is Armani. Armani makeup team is so great at texture. They almost never fail. Well, sometimes they do, like with Rouge Ecstasy lipstick, but only rarely.

Still I can’t say, that it’s impossible to get to the right place and coverage with this eyeshadow, it’s just much harder than, in my opinion, it’s supposed to be.

There’s a small chemical whiff up front, but it disappears quickly. The eyeshadow is nice and soft on the lids. And it does have this striking shiny look to it.

The package is really small, so there’s not much eyeshadow in there for you.

The brush is this spongy thing, shaped in a pretty fancy way, its shape reminds me of YSL Bouch-a-Bouche lip gloss applicator.

This fancy shape doesn’t get in the way of application. And it doesn’t help it either. It’s just like any other spongy brush.

The shade I got is this classic bright blue. Barbie like 🙂 The blue eyeshadow colour they used on stars in old Hollywood movies.

The simple fact is I love the effect and look of this eyeshadow, but I’m not a fan of its texture.

So, my personal verdict on Full Metal Shadow by YSL is as follows – it’s too tough to apply evenly for me to be able fall in love with it. But I could give it a second chance and pick up a couple more shades. Maybe, I’ll do just that.

As of now, the range consists of ten shades:

If you’ve tried YSL tints before, you kind of know what it’s like. The way this one is different is that there is this lip care element to it that YSL promises. Well, let’s see, if it holds true and to what extent, if any.

Unfortunately, just like other tints by YSL, it has this strong scent up front, to me it’s like there’s something liquor like about it, and this scent lasts for quite a bit. The good news is that it does go away, eventually. But if you’re scent sensitive, it might be hard for you to get through this time.

The texture of Pop Water tint is surprisingly sheer. It’s almost like lip gloss. It’s not that it’s bad, it’s just not what I’m used to in YSL tints, so I didn’t expect that. Be forewarned.

It’s shiny too. Has this lip gloss shiny look to it. Very pretty.

The shade I got is my perfect red shade. Red with a good deal of orange in it, so that it’s bright and vibrant, as opposed to being dark and sultry. 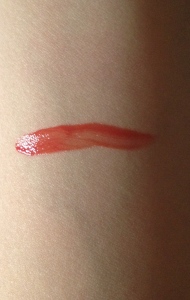 This shade is very becoming. It will look good on a whole lot of people out there. And it will bring out the best in every personal look and complexion. Very personalized lip shade. Cool 🙂 It’s not so much a vampy red, but more like a happy red. Although, of course, you can create such a look around it, that will make it steaming hot. It’s your choice 🙂

Well, as I said up front, in this particular tint YSL promised us this lip care element and not just colour. I have to tell you, they nailed it. You know how I feel about lip care&colour products, it usually doesn’t work that well, and you get one or the other, and this one is colour in most cases. This tint though does feel luxuriously soothing on the lips. It’s awesome. Just be sure to give it a minute or two or three. This care feel somehow doesn’t kick in right away. It takes time for it to come into action. But once it does, you’ll love the sensation.

As of now, there are eight shades of Rouge Pur Couture Vernis a Levres Pop Water.

I’d say, of the two products by YSL I’ve tried here I’m quite happy with the lip tint, it makes me want to go out and get all the shades. I’m not that happy with the liquid eye shadow though. I might pick up a couple more shades, but I suspect it’s more like a leave it thing for me, and not take it. Well, one out of two products is a quite good result, so I’m not complaining here.