Here we have two palettes by Sephora. Remember, last time around we got smoky eye look in the similar form and limited edition packaging?

Well, judging by the names of the palettes – Nude and Neutrals – these must be the opposite of smoky eyes.

I have to tell you up front, that I rarely get Sephora, because the quality is professional, that is not quite what I want it to be. It’s not necessarily bad, it’s just different than luxury market makeup quality, because it tuned in accordance with professional artists needs. I generally prefer luxury market makeup texture and feel over professional makeup. But… sometimes those limited editions get me. And I do buy. This here is one of the instances of the kind. Well, Ok, two instances.

Palettes of the kind by Sephora always come in transparent cases and with a paper telling us what exactly we have in each palette. This paper though doesn’t contain any suggestions of how we could mix and match the shades, if that’s what you’re looking for.

For starters, this snaky beige faux leather packaging is really cool and special. I love it. It got me. 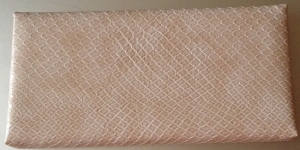 Delicate Nude. This name of the palette is so true.

Man oh man, Sephora nailed it this time around.

Before we get to the eyeshadow, there’s also a brush and an eye pencil that comes with it.

The brush is dual ended. One side is an all over shadow brush. A typical medium size professional eyeshadow brush.

The other side is also a very common eyeliner brush, that just doesn’t work for me at all 🙂 There’s no way in the world I could draw a straight enough line with this brush and an eyeliner, so it’s very much of a ‘leave it’ case for me, not ‘take it’.

This kind of brush though can be also used for precise eyeshadow application. That I can do. This brush definitely works for that.

The eyeliner pencil is pretty soft and nice to the touch on the lid and is this awesome golden beige colour.

Gorgeous eyeliner shade that anyone out there can benefit from.

And now, finally, we get to the eyeshadow. There are twelve shades. Just writing ‘twelve shades’, makes my heart sing. So many options. So much variety.

We’ll go in bunches of three to see the shades more closely.

The upper beige row. The first three shades on the left.

Then an ever so light and kind of pearly beige. Almost whitish.

And at the very bottom there’s a matt light beige.

The next three shades from the beige upper row of the palette.

Mauve that looks kind of muddy in the palette, but comes off very nice and mauvy, when swatched. Very pretty.

Now the bottom row. The purple side of the palette. Let to right. In trios.

An ever so light matt lilac. Almost whitish

A beautiful and shiny golden pink. Love this shade! It’s so flattering. So pretty. An effortless chic kind of shade. With it you’ll be done with your makeup in a second.

Next three shades from the bottom row.

A beautiful and shiny golden mauve. Another great one. All said above about golden pink applies here. And if you put these two shades together in one look… wow.

See more swatches of the palette. 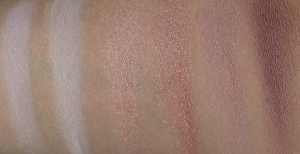 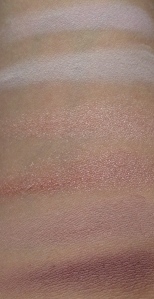 This palette is a great thing to have, given its design, an awesome eyeliner shade and those soft and subdued eyeshadow colours. Delicate Nudes indeed. I agree. You’ll might want to have this palette, if you don’t do bright makeup, or don’t do it most of the time, and like to wear nude lighter shades. If you’re generally going for well groomed without being made up look. And guess what, even if you love bright shades, this palette here will be a wonderful break through your colourful routine. As we all know, sometimes there’s a lot of sophistication in understating it rather than overstating it.

The second palette. It Palette Neutrals.

Neutrals? Interesting. When I hear ‘nude’, I kind of know, what it’s all about. But neutrals? Now I’m curious. Sephora gets a pat on the back for that alone 🙂

It has the same kind of dual ended brush in it.

And there’s an eye pencil.

The shade is darker grey. Matt. There is just a touch of beige in the background that adds depth to the shade. 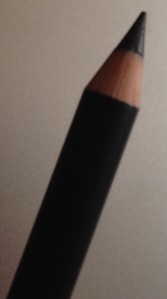 The eyeshadow now. There are twelve shades.

And there’s a paper with all of them listed.

Now I have a question. You call this neutral???

I see blues here in the top row.

And brownish greens and pink browns in the bottom row.

What’s neutral about that? I don’t know. I’m going to swatch it first though before I form an opinion.

By the way, Sephora states that out of these twelve two shades are eyeliner shades, one is a base shade and one is a highlighter shade. Oka-ay, let’s see.

Off we go in trios. Top row first. Left to right.

White that’s not quite matt, there’s a satiny feel about it. Eye highlighter, according to Sephora.

An ever so light blue. Matt. It’s an off white shade, really. Very pale.

Pearly light cool blue. Icy. Very pretty. Will work not only on those, whose eyes are blue.

Next three shades from the top row. 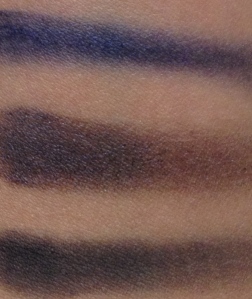 Bright blue. The shade of fall 2015. It’s a bold shade, more daring than the blue we’ve come to expect in eyeshadow. It’s cool and artsy, if you dare to use it. You can always say it’s just an eyeliner shade for you.

Navy blue with a bunch of silver sparkle. This shade is so dark it almost goes into purple territory.

A very appealing matt grey. Not too dark, not too light. A good grey. Eyeliner shade, according to Sephora.

A very light matt yellowish beige. An off white shade. Base shade. You won’t get much of any other colour than white here. Eye primer, according to Sephora.

A shiny pale beige with sparkle. It looks goldish in the palette, but it’s so light, when swatched, it mostly gives off lighter beige.

Next three shades from the bottom row. 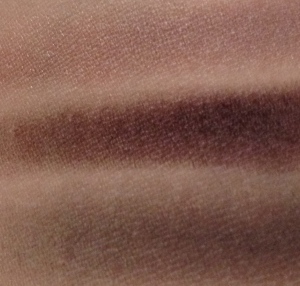 A light brown like shade, it’s beige on the way to brown, that’s what it is.

Brown. Rather dark. Eyeliner shade, according to Sephora.

That’s it. Ok, so, I still have no clue, why these shades are neutral. This palette is universal though. If your eyes are blue, the upper row is your destination. If your eyes are hazel or brown or green, the bottom row is obviously made for you.

This palette is not bad at all, but my heart goes all out for those softer delicate shades. If I had to take a pick, I’d go for Delicate Nude before Neutrals. Now let’s see what you think about it.