I have to tell you, I was kind of apprehensive to try Ecstasy Lacquer, because while I generally like Armani makeup formulae a lot, their Rouge Ecstasy lipstick is almost the only makeup product by this brand, that I don’t like in the least. I don’t like its scent, I don’t like the way it feels on the lips, I don’t get the caring element which is stated to be part of the formula. The bottom line is I can’t really wear Rouge Ecstasy.

But as usual my curiosity got the better of me and here I am trying Ecstasy Lacquer and hoping it will be better than Rouge Ecstasy.

Armani makeup team calls it ‘excess lipcolor shine’. To me it means it’s an intense lip gloss. That is, my presumption is it’s going to be shiny but not really sheer. Let’s see, if it holds true.

The packaging is vampy. All black with the shade presented on the packaging on the bottom. It looks cool. Even though I’m no big fan of artificially presented colour. I’m all for seeing the colour through the packaging, because artificial presentation of the kind isn’t always true to what the shade really is.

As much as I love Armani makeup, there’s one general trait about their formulae for lip colour, all those products have a chemical whiff on application, which goes away rather fast though and doesn’t really re-emerge. Well, Ecstasy Lacquer has, in fact, a whiff of quite pleasant makeupy scent up front instead of this chemical whiff. It’s nice.

The brush is your typical lip gloss spongy applicator. Only it’s bigger and kind of flat on the sides. It’s workable all right. 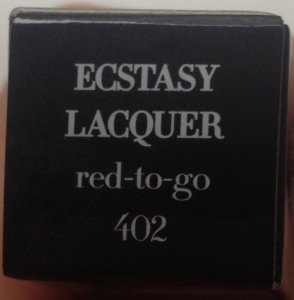 The shade I got 402 red-to-go proved to be absolutely my favourite kind of red.

Not too dark. With some orange in it. Bright vibrant red. Love it.

The finish of Ecstasy Lacquer is shiny. Here’s the surprising part. Although I expected it to be quite thick in coverage, it’s a multitask kind of thing. You can go here from half transparent to liquid lipstick full coverage look with some shine to it by building it up and layering it on your lips. Great. It means, this lip product can be different day to day, and that it can make more people out there happy 🙂

Now for the feel of Ecstasy Lacquer. It’s different from that of lip gloss, because it doesn’t have this weightless feel to it. You know, how lip gloss is the lightest of all existing textures in lip colour world, and how some people love it just because they don’t like to feel they have lipstick on their lips. Well, Ecstasy Lacquer is not quite lip gloss in this sense. With it you do feel like there’s something there, on your lips. It’s not a bad feeling, it’s just there. Other than that it’s pleasing and velvety.

Well, if my starting point with this product was apprehension, I’ve travelled a long way since. I like Armani Ecstasy Lacquer. It doesn’t have any of the things about it that I so don’t appreciate in Rouge Ecstasy. Ecstasy Lacquer is a great intense lip gloss. Good formula yet again by Armani. And… I just love that it’s buildable from kind of sheer to full coverage. I mean, isn’t that great? I think it is 🙂