I’ve already talked about Bobbi Brown collection released for this holiday season in my post called Bobbi Brown The Sterling Nights Collection holiday 2015 swatched. But that’s not all the good stuff we get from Bobbi Brown for holidays. This brand also releases a big palette and a shiny compact and all kind of sets every year, when holiday season comes. I like palettes and sets, as it’s a lot of makeup  🙂 And among all this variety and beauty I stand a good chance to hit something I like. Also, I like that it’s kind of a tradition by Bobbi Brown. Holiday traditions are nice.

The same packaging design as in The Sterling Nights collection. Velvety black and silver lettering. I like this design. Looks really lush. Good job 🙂

And the same heraldic design on the palette itself. Bobbi Brown holiday design.

Two levels. On the top level in the palette we have eight eye shades. Not too much product, not too little either, somewhere in between, I’d say. But eight shades – that’s a lot.

I look at the shades in the palette – and I’m not surprised. It’s Bobbi Brown, and it’s all nudy nude. 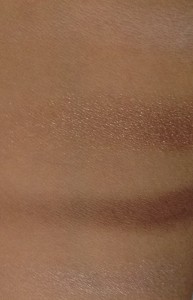 Ivory Eye Shadow An off white matt base shade

Cement Sparkle Eye Shadow Greige with as much silver sparkle as it’s humanly possible to get in there. The most beautiful shade in the palette, to my taste. I wanna wear it. Right now. 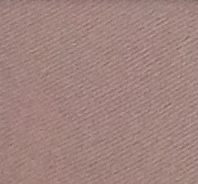 Caviar Eye Shadow Matt black Here’s a question. Why do we have matt charcoal grey and matt black in one palette? Too much dark matt smoky eye shades in one place, seems to me.

You like nudes? You might like this palette then. There seems to be many more cool shades here than warm shades. They are all calm and nice. Oh, and I do love that greige with silver sparkle – Cement Sparkle. It’s awesome.

And on the bottom level in the palette we have two blush shades. Classical powder blush professional formula. Quite good.

Desert Rose Blush Pink with purple peeking at us and smiling a little bit in the background, very natural looking, the blush shade of this holiday season, only other brands did it with golden shine, and Bobbi Brown did it without. Very natural. And becoming. I like it.

Pale Pink Blush Pale Pink? I guess, my view of the world is quite different. This pink is not pale at all. It’s bright. Very bright. Will seem too bright to some people. I like this shade though. When one looks at it, one usually thinks – too doll like, but it can be applied sparingly in such a way as to make it look very natural and fresh on the cheeks.

I enjoy both blush shades. We don’t get these shades too often in blush world, they are not too common. But they are so becoming. And pretty.

As it’s usually the case with Bobbi Brown palettes, nude makeup fans will enjoy this one, because of all the nude eye shadow in it but… The two blush shades don’t look too natural at the first glance. Or nude. They might not be what nude makeup fans want to see or enjoy. So, if you do like the nude look or looks, take a close look at blush swatches before you buy.

The second traditional product for Bobbi Brown on holidays is Shimmer Brick Compact.

Shiny highlighting powder, that’s what it actually is. Too shiny to use it all over, as far as I’m concerned, but I could use it as a blush or as a highlighter. It serves both purposes well. 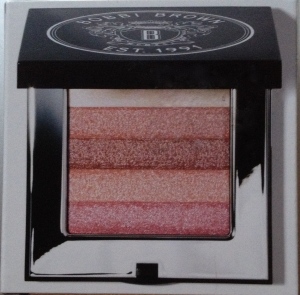 This holiday season it comes in Pink.

I’m excited. I like pink highlighters. I think they look good on most people. And we rarely get them. More often than not we see bronze, orange, gold in highlighter world, and it’s a pity 🙂 But here we have pink. Yes! 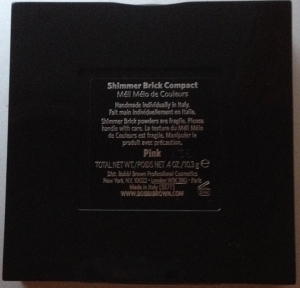 Cute. White, pink and mauvish. I can’t wait to see what it’s actually like.

Pink? Well, if it is, it’s ever so light pink. Very very light. Beigish or whitish almost. Not much pink here. Not pink enough for me. 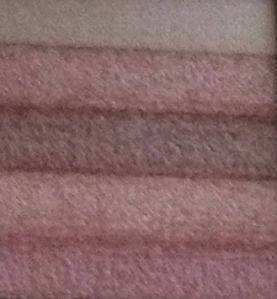 If I weren’t expecting pink though… it’s actually a nice touch of delicate shine to have on the cheeks.

If it weren’t for the shimmer and shine, I’d say, it’s nude almost. If I shiny highlighter can actually be nude 🙂

I can’t get over my disappointment though of not getting the pink I was hoping to get, so I can’t love it. Just can’t.

When I got the Shimmer Brick Compact, I was given this mini Bobbi Brown brush as a bonus.

It’s quite efficient, if you use it to apply blush or highlighter.

Soft without being too soft. Good shape. Sculpting mission is possible with it 🙂

Both the holiday palette and Shimmer Brick by Bobbi Brown proved to be quite nice this holiday season. Understated. Like a whisper of holidays. Like anticipation. Like the holidays you spend with your family as opposed to the holidays you celebrate in a night club, when you’re all dolled up.

The best thing about this palette is that we can wear it after holidays. In real life. And it’s not always the case, when it comes to holiday collections. The other thing I like is that it doesn’t have gold in it J Too much gold for holidays always in makeup world.

Actually, you know what, if you’re going to wear something silver (not gold J ) any time soon, say, for a special occasion, this palette is worth getting. These shades will look stunning with silver outfits. Truly chic and sophisticated.